Lincoln’s locally-owned bookshop filled with good stories and great gifts for all readers since 2017. 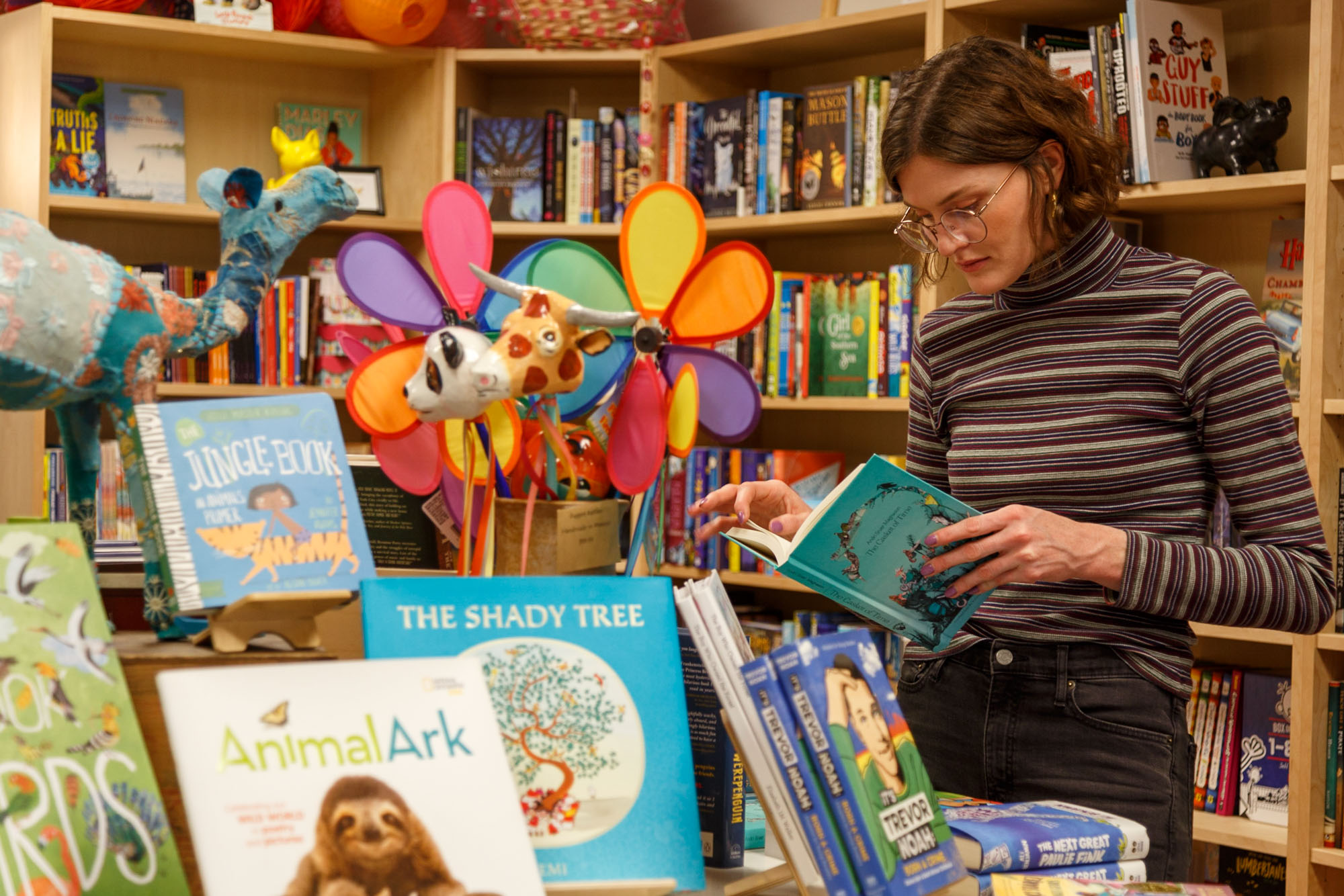 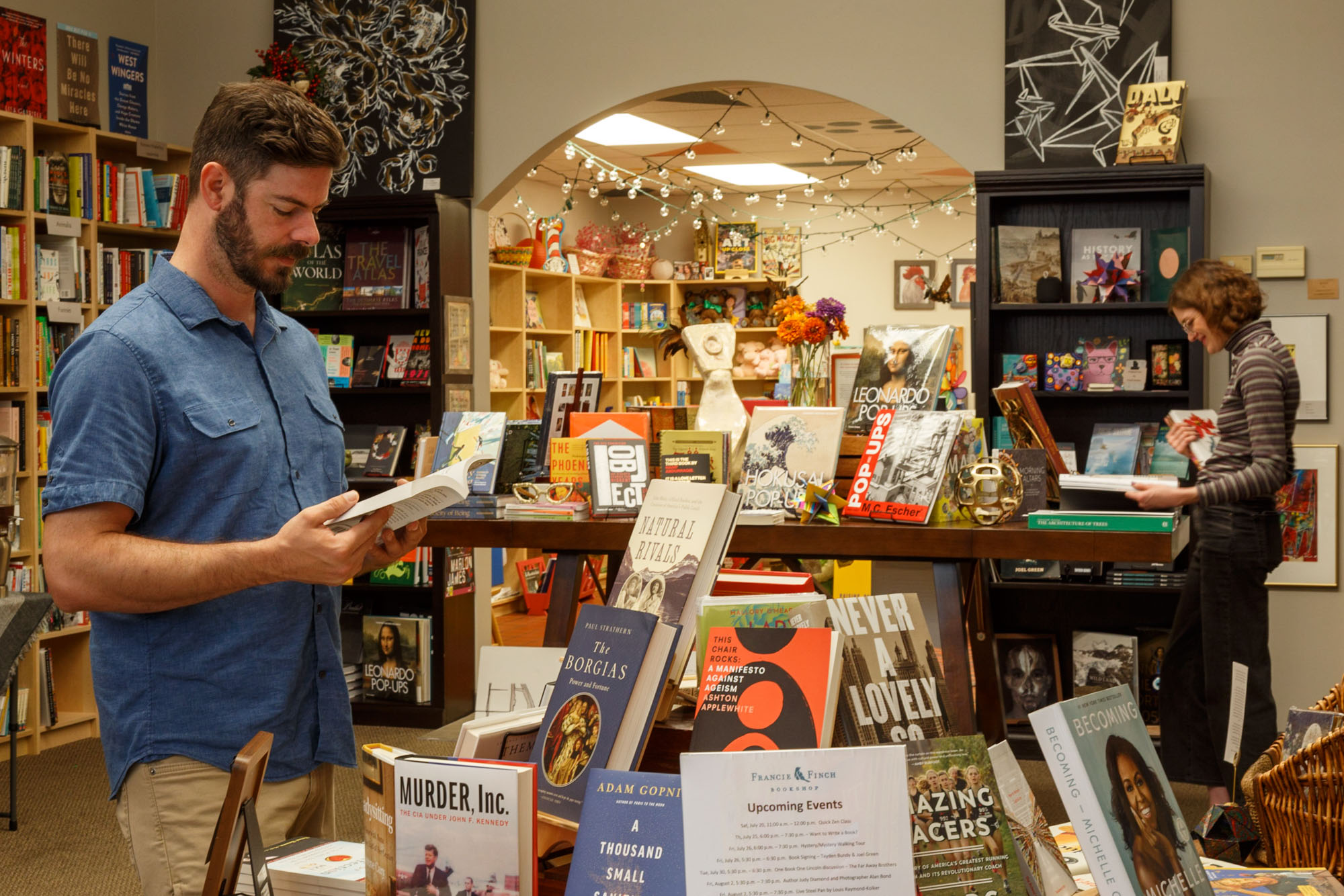 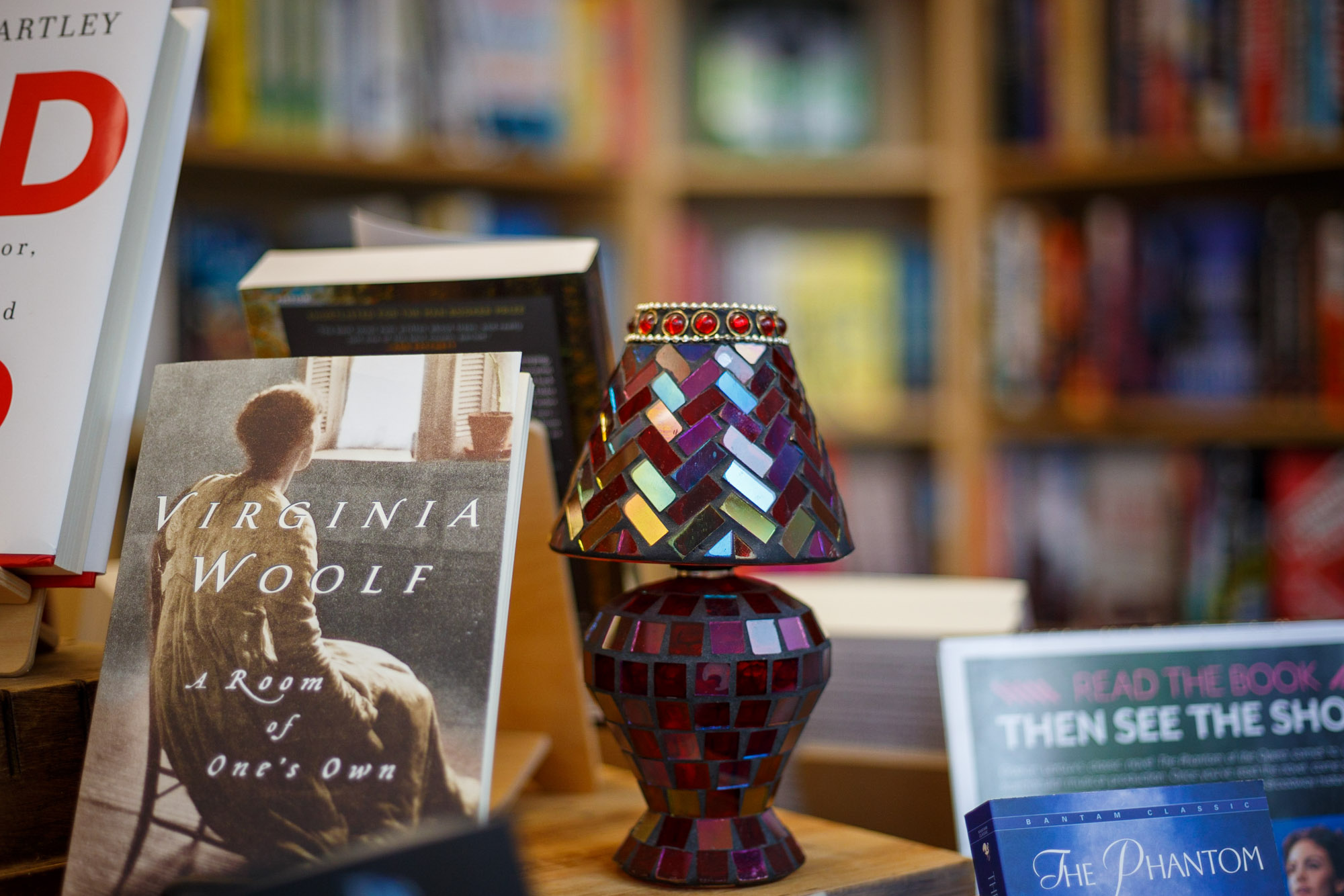 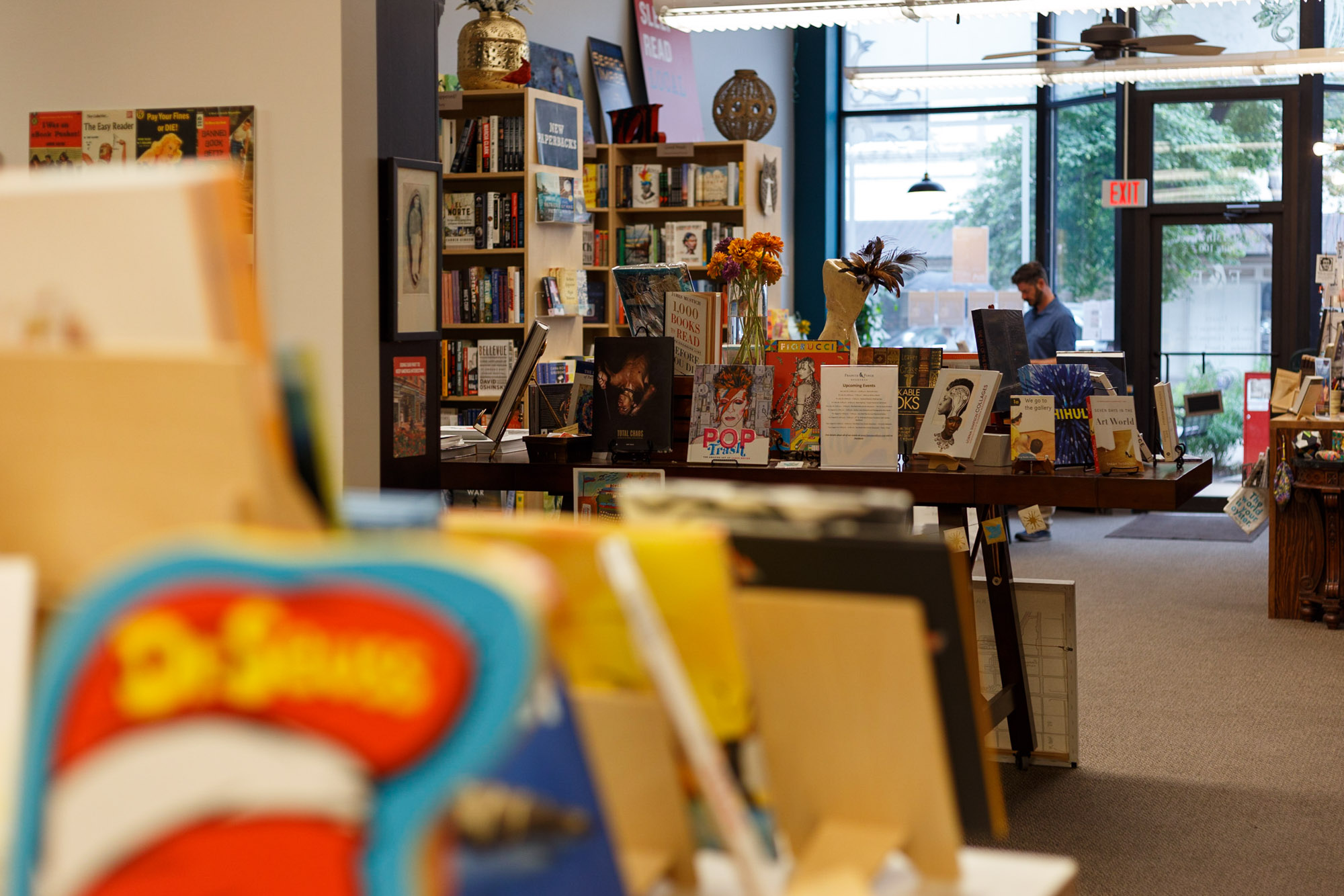 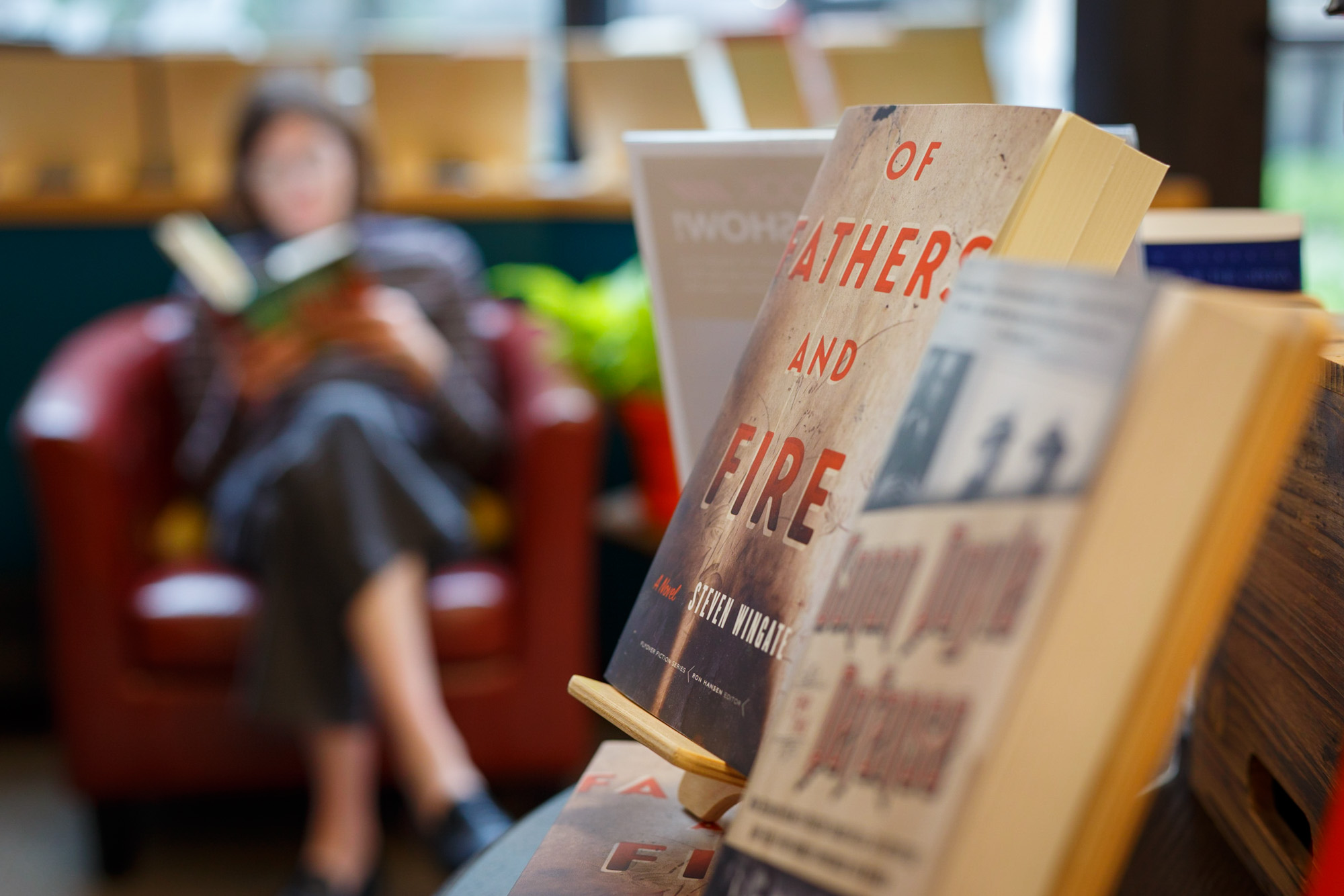 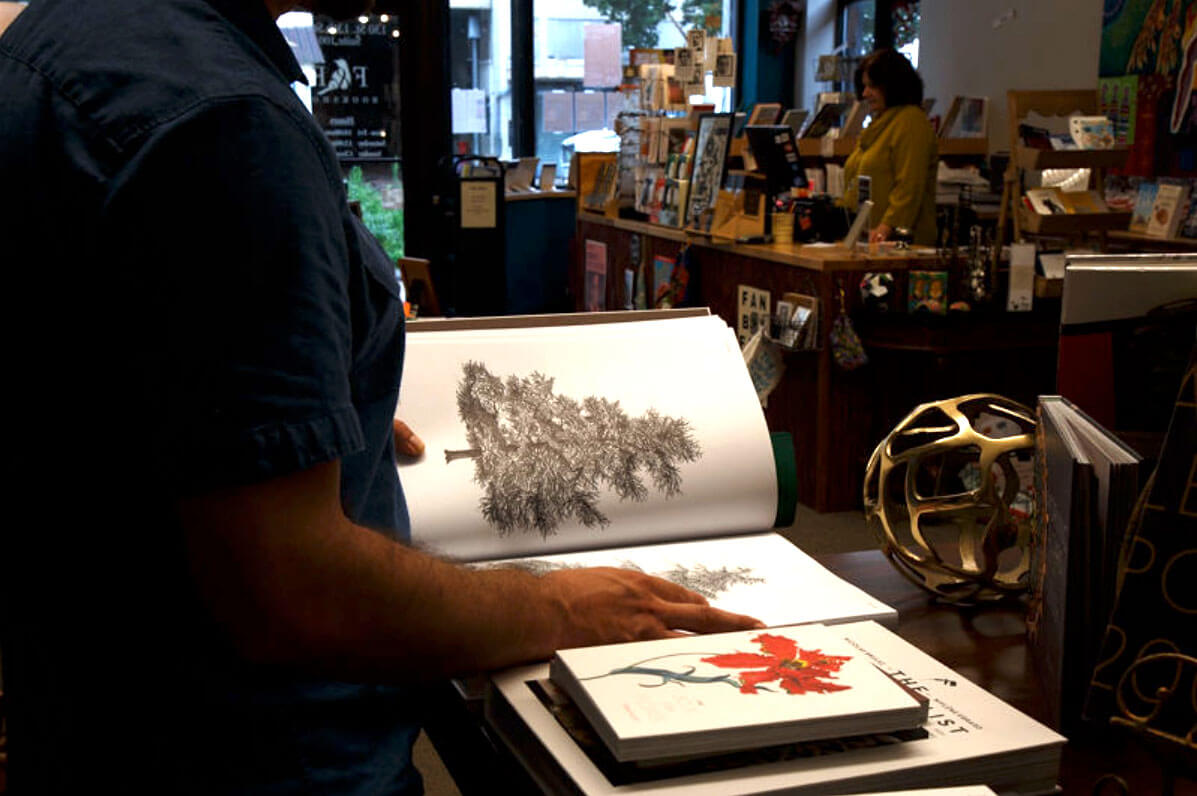 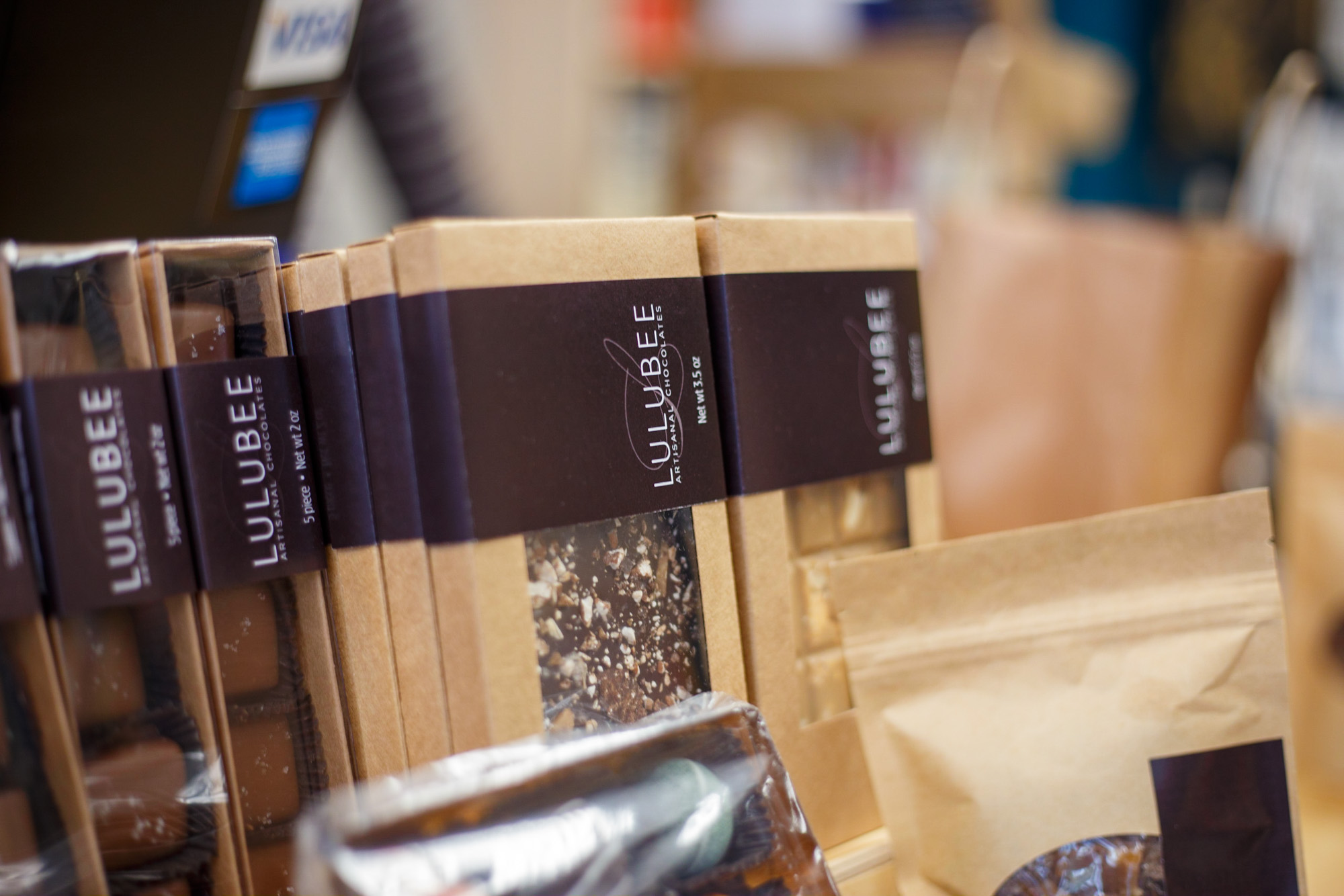 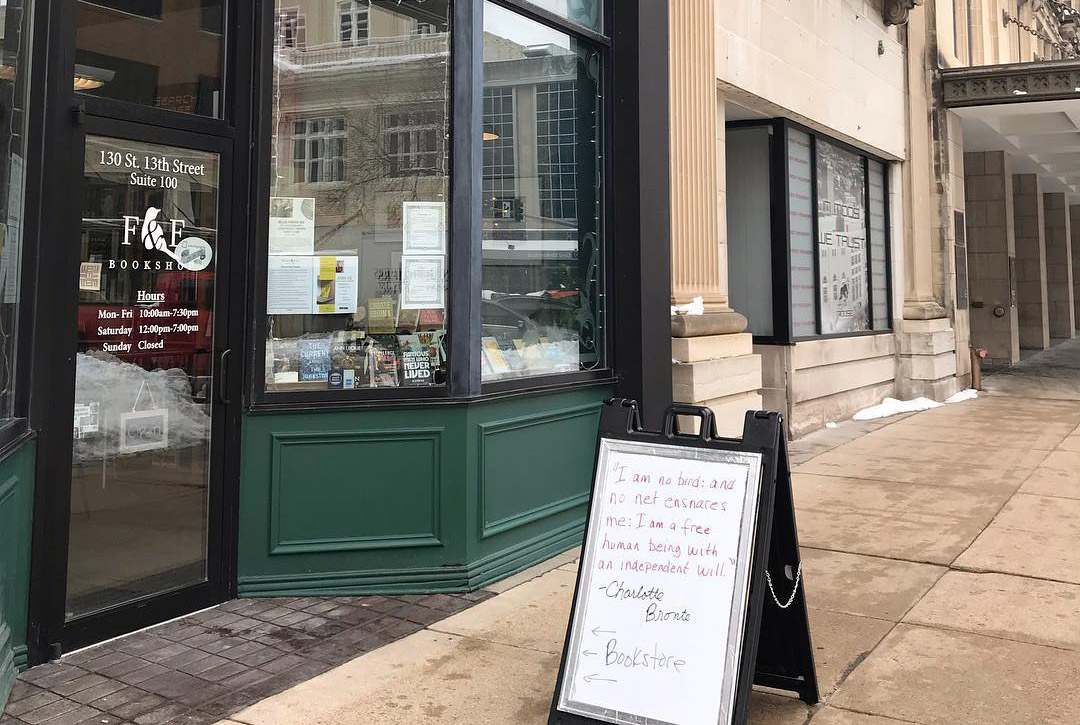 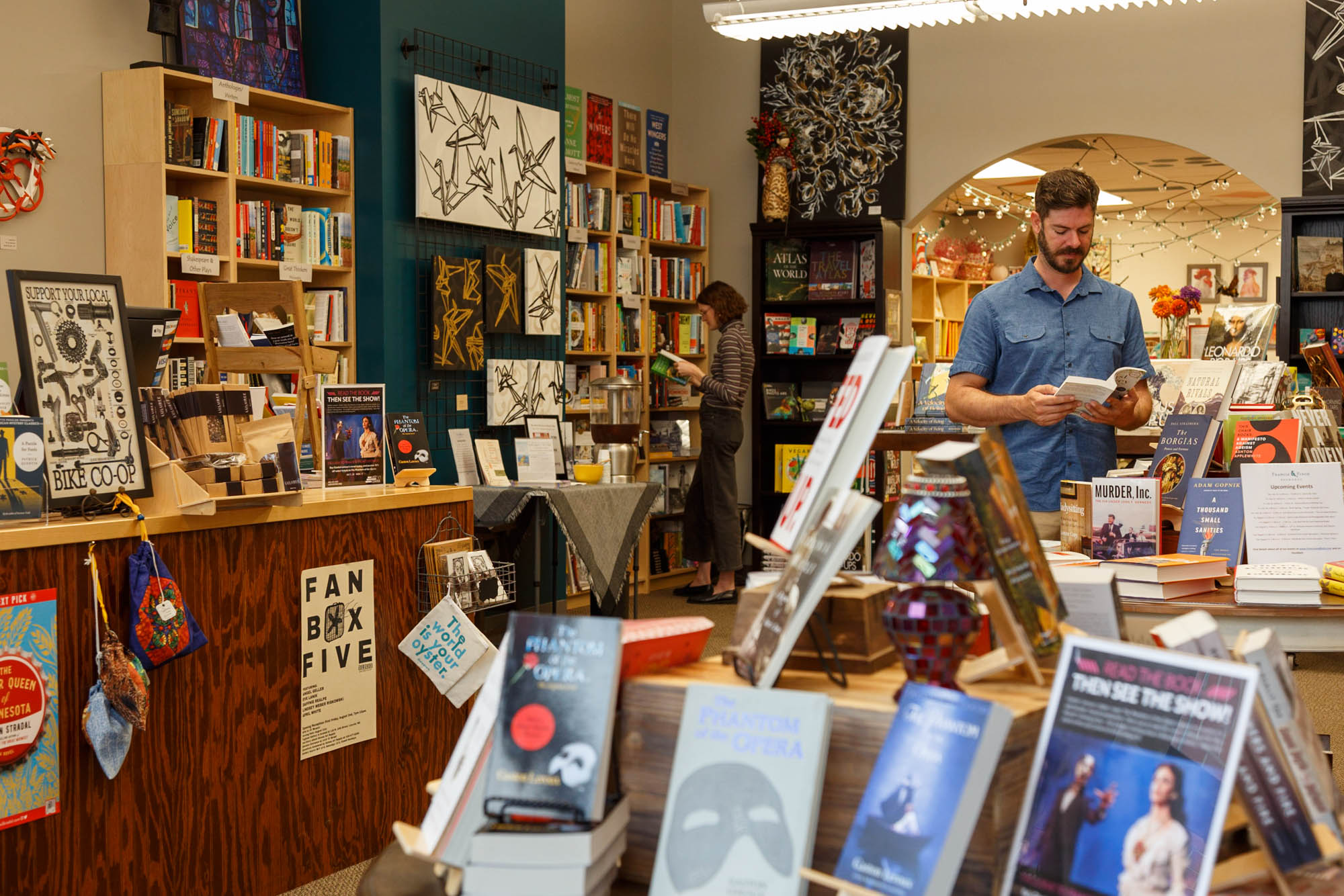 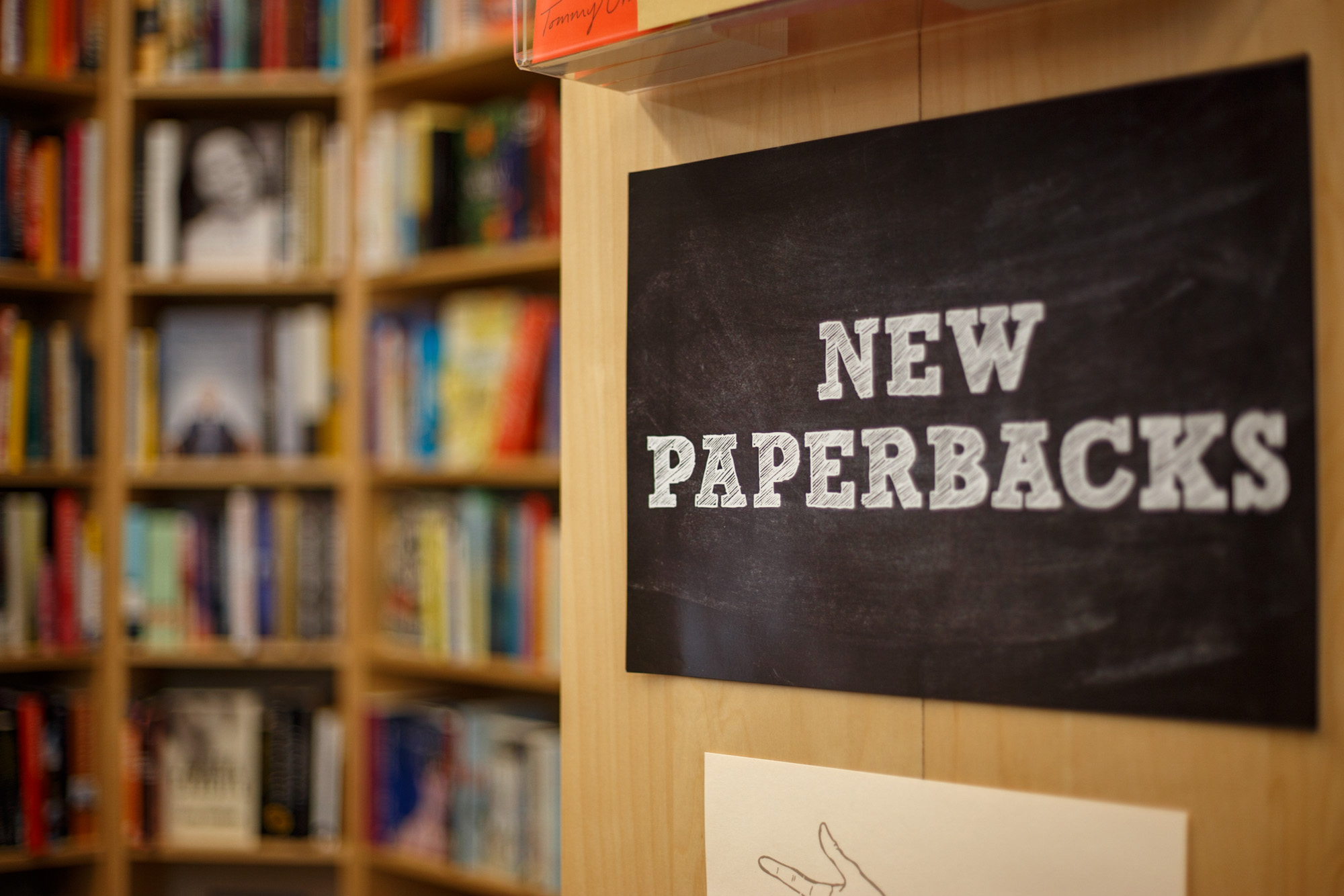 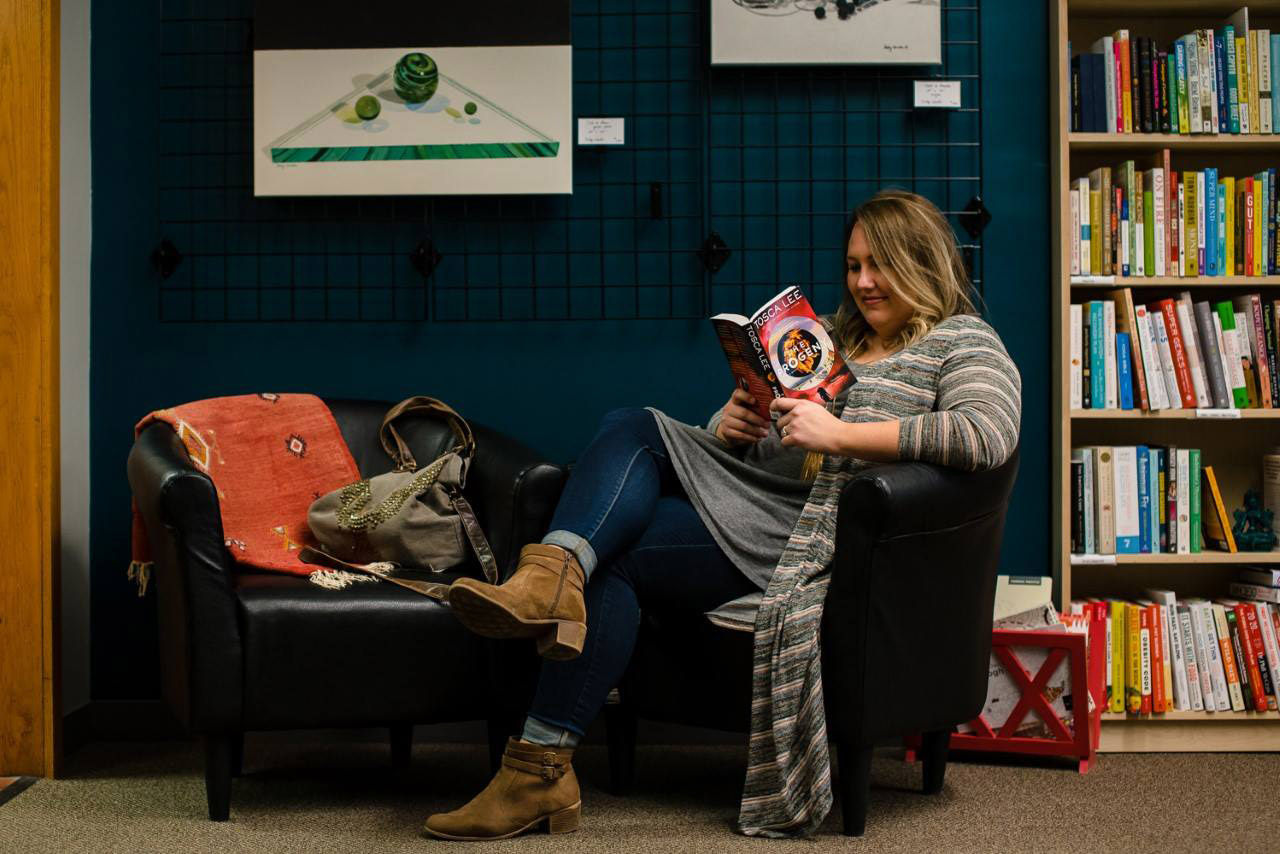 At Francie & Finch, we bring the world of books to our community.

Lincoln is a growing and vibrant city. As one of the newer bookstores in town, we pride ourselves on our unique inventory that reflects both the local and international communities that call Lincoln home. Whether you are searching for a novel by a Nebraska author or you want to explore the world through literature, we can help you find exactly what you are looking for!

Located in the heart of downtown at 130 S. 13th, we are just a short story away from campus and hundreds of local businesses.

With the click of a button you can shop everything we have in store and more! Below we’ve picked out some of our favorite books, check them out! 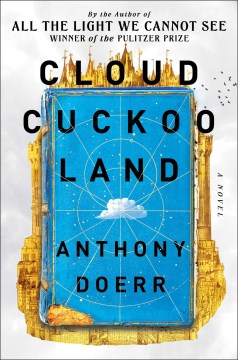 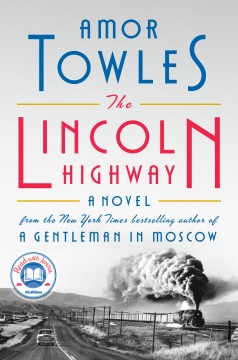 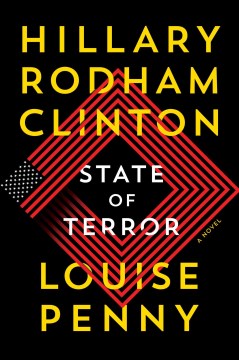 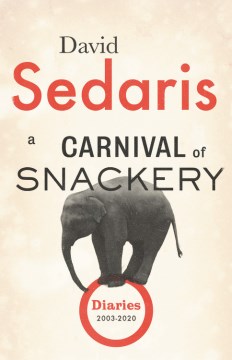 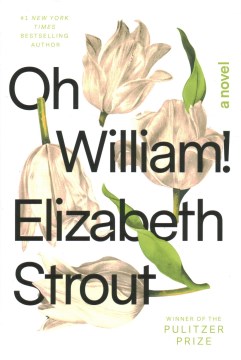 With the click of a button you can shop everything we have in store and more! Below we’ve picked out some of our favorite pieces, check them out!

From First Fridays to author events and poetry readings. Know the latest events happening at our store. See you then!

Virtual Lunch at the Library - William Thomas - A Question of Freedom 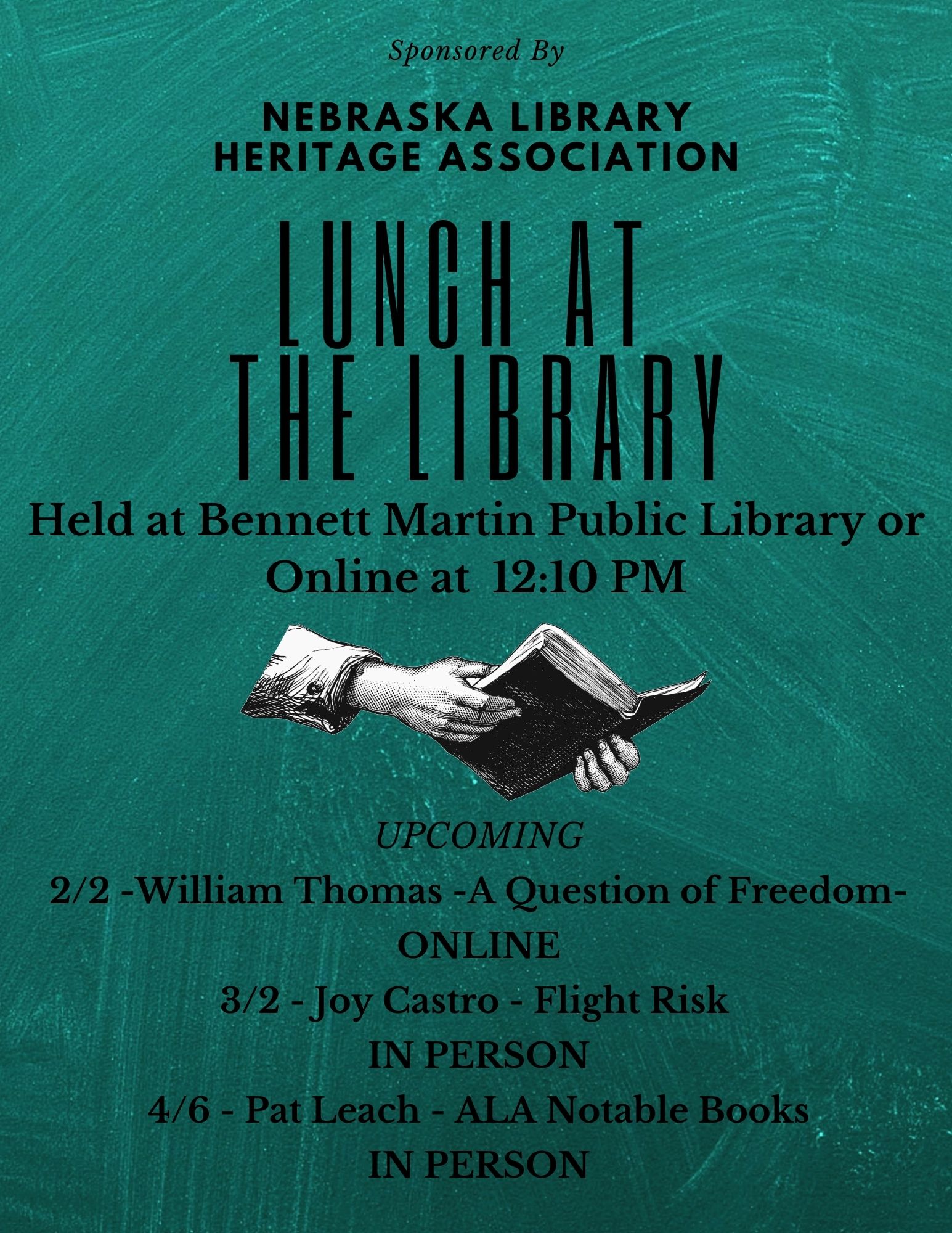 THIS EVENT WILL BE VIRTUAL - REGISTRATION LINK WILL BE UPLOADED SOON On Wednesday, Februrary 2nd, join William G. Thomas virtually as he talks about his book A

THIS EVENT WILL BE VIRTUAL – REGISTRATION LINK WILL BE UPLOADED SOON

On Wednesday, Februrary 2nd, join William G. Thomas virtually as he talks about his book
A Question of Freedom: The Families Who Challenged Slavery from the Nation’s Founding to the Civil War.

About the Book:
Winner of the Mark Lynton Prize in History – the story of the longest and most complex legal challenge to slavery in American history. For over seventy years and five generations, the enslaved families of Prince George’s County, Maryland, filed hundreds of suits for their freedom against a powerful circle of slaveholders, taking their cause all the way to the Supreme Court. Between 1787 and 1861, these lawsuits challenged the legitimacy of slavery in American law and put slavery on trial in the nation’s capital. Piecing together evidence once dismissed in court and buried in the archives, William Thomas tells an intricate and intensely human story of the enslaved families (the Butlers, Queens, Mahoneys, and others), their lawyers (among them a young Francis Scott Key), and the slaveholders who fought to defend slavery, beginning with the Jesuit priests who held some of the largest plantations in the nation and founded a college at Georgetown. A Question of Freedom asks us to reckon with the moral problem of slavery and its legacies in the present day.

Order a copy of the book HERE

Lunch at the Library is sponsored by the Nebraska Literary Heritage Association. All lunch talks will be held of the 4th floor of Bennett Martin Public Library. Bring your lunch when event is in person. Coffee will be provided courtesy of The Mill. 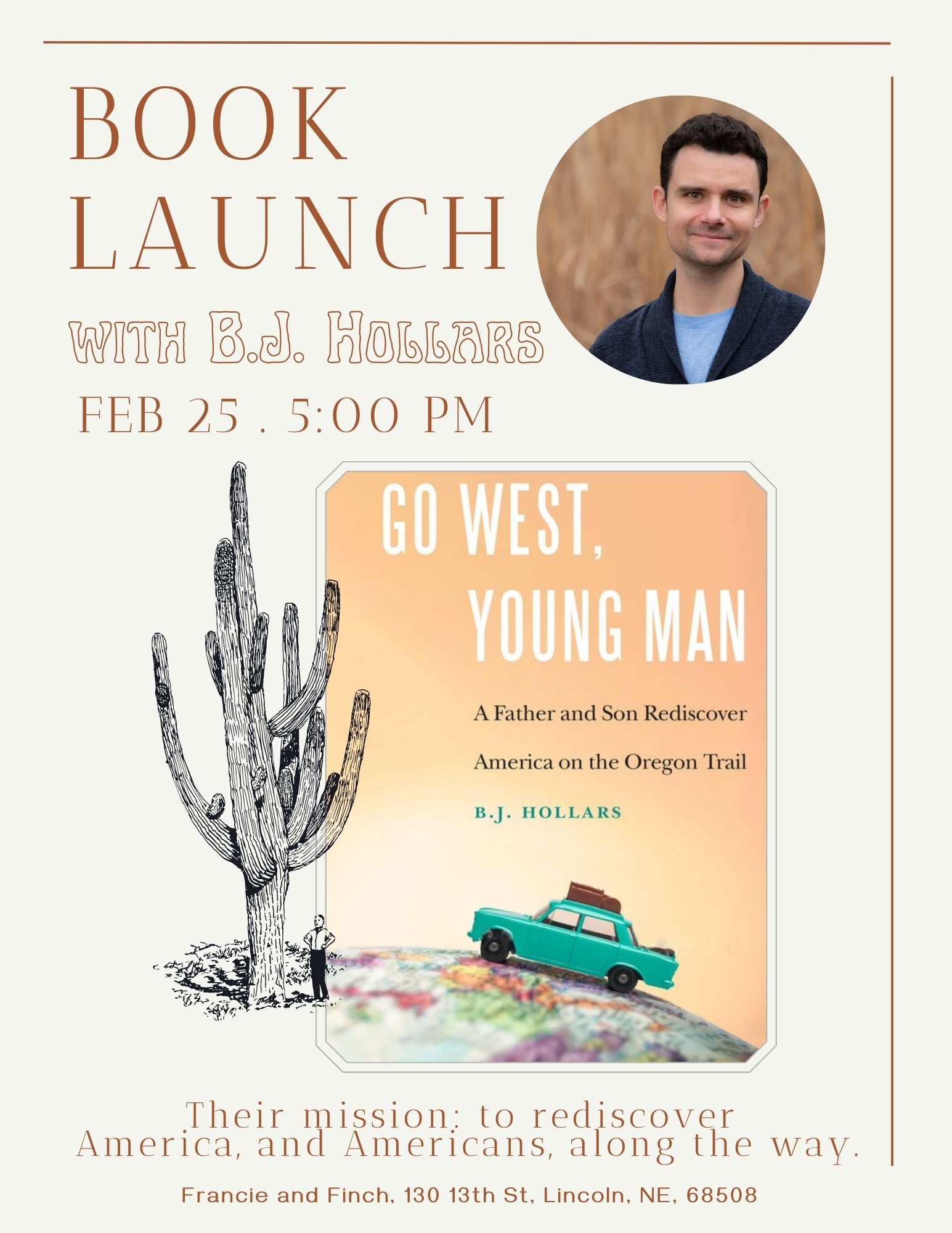 B.J. Hollars comes to Francie and Finch in February to present his new book Go West Young Man!  ABOUT THE AUTHOR: B.J. Hollars is

ABOUT THE AUTHOR:
B.J. Hollars is the author of several books, most recently Go West Young Man: A Father and Son Rediscover America on the Oregon Trail. Hollars is the recipient of the Truman Capote Prize for Literary Nonfiction, the Anne B. and James B. McMillan Prize, the Council of Wisconsin Writers’ Blei-Derleth Award, and the Society of Midland Authors Award. He is the founder and executive director of the Chippewa Valley Writers Guild and the Midwest Artist Academy, as well as an associate professor of English at the University of Wisconsin-Eau Claire, and a columnist for The Leader-Telegram.  He lives a simple existence with his family.

ABOUT THE BOOK:
At the sound of the bell on the last day of kindergarten, B.J. Hollars and his six-year-old son, Henry, hop in the car to strike out on a 2,500-mile road trip retracing the Oregon Trail. Their mission: to rediscover America, and Americans, along the way. Throughout their two-week adventure, they endure the usual setbacks (car trouble, inclement weather, and father-son fatigue), but their most compelling drama involves people, privilege, and their attempt to find common ground in an all-too-fractured country. Writing in the footsteps of John Steinbeck’s Travels with Charley, Hollars picks up the trail with his son more than half a century later. Together they sidle up to a stool at every truck stop, camp by every creek, and roam the West. They encounter not only the beauty and heartbreak of America, but also the beauty and heartbreak of a father and son eager to make the most of their time together. From Chimney Rock to Independence Rock to the rocky coast of Oregon, they learn and relearn the devastating truth of America’s exploitative past, as well as their role within it.

Go West, Young Man recounts the author’s effort to teach his son the difficult realities of our nation’s founding while also reaffirming his faith in America today.

PRAISE FOR THE BOOK:
“Go West” is a sweet read, part memoir, part history, part awakening — both for Henry and for his dad.”–Laurie Hertzel, Minneapolis Star-Tribune

“Hollars ‘ book is a useful trail introduction and a good description of what one can expect on a similar trip. ”
–Bill Hill, Overland Journal

“Three years ago, B. J. and Henry completed their western journey, a father and son searching for a better side of themselves. And Go West now takes readers on that journey: inward, onward, and upward for a wider view of the wider world.” –Ken Szymanski, Volume One

On Wednesday, March 2nd, join Joy Castro as she talks about her latest novel Flight Risk! About the Book: Isabel Morales is a successful Chicago sculptor hiding a brutal family

On Wednesday, March 2nd, join Joy Castro as she talks about her latest novel Flight Risk!

About the Book:
Isabel Morales is a successful Chicago sculptor hiding a brutal family history–one not even her husband knows. After decades of turning her back on her past, she’s forced to return to Appalachia when she receives news of her estranged mother’s death. But going back means revisiting the traumatic childhood she escaped–and the family that cast her out when she needed them most. Back on the land she has inherited, she’s flooded with memories of the forest where she once roamed free, of her beloved lost brother, and of the old house in the West Virginia hills where she grew up. Her mother has left her another legacy, too, which reveals secrets that Isabel is only beginning to understand. As forces bear down and threaten to take what she has left, it’s time for Isabel to step into her power, reclaim her roots, and finally confront the painful memories that have kept her from the life she truly wants.

About the Author:
Joy Castro is the award-winning author of the post-Katrina New Orleans literary thrillers Hell or High Water, which received the Nebraska Book Award, and Nearer Home; the story collection How Winter Began; the memoir The Truth Book; and the essay collection Island of Bones, which received the International Latino Book Award. She is also the editor of the anthology Family Trouble and served as the guest judge of CRAFT‘s first Creative Nonfiction Award. Her work has appeared in the New York Times Magazine, Senses of Cinema, Salon, Ploughshares, Gulf Coast, Brevity, Afro-Hispanic Review, and elsewhere. A former writer-in-residence at Vanderbilt University, she is currently the Willa Cather Professor of English and Ethnic Studies at the University of Nebraska-Lincoln.

Order a copy of the book HERE

Lunch at the Library is sponsored by the Nebraska Literary Heritage Association. All lunch talks will be held of the 4th floor of Bennett Martin Public Library. Bring your lunch. Coffee will be provided courtesy of The Mill.

Get F&F news delivered to your inbox!

Find your next favorite book and learn about upcoming events at Francie & Finch Bookshop by signing up for our “Shelf Awareness” e-newsletter. You’ll be so glad you did!